A 9 year old desexed female Border Collie was referred to the Veterinary Referral Practice with a long standing history of severe halitosis, recent facial swelling and general ill health. The dog had an on/off history of halitosis, swelling of the right hand side face and pain on eating. The symptoms would respond to a course of oral antibiotics, but quickly recur after the course finished. The referring veterinarian requested that intraoral radiographs be taken to determine the extent of the oral disease and to treat any underlying pathology.

Image Gallery – please click on images below to enlarge

On presentation to the referral practice, the dog appeared depressed but with no raised temperature. There was a right sided generalised facial swelling mainly involving the right maxillary cheek area. There was a lip fold dermatitis involving the lower lip. There was some pain on opening the mouth and there was gross calculus and plaque present especially around the maxillary premolar and molar teeth with grade 3 furcation involvement of several premolar teeth. There was a discharging buccal mucosa sinus above the left maxillary 4th premolar tooth (208)(Figure 1). There was evidence of stomatitis involving the cheek teeth of both sides of the maxilla. Draining mandibular lymph nodes were slightly enlarged, mobile but not painful.

The dog’s pre-anaesthetic blood analysis showed a high end of normal white cell count, but there was no renal or hepatic dysfunction.

Size 4 plates are ideal for this task by including more teeth on the plate as well as areas of the nasal cavity (to look for nasal pathology). This reduced the number of exposures required to do the whole mouth series of radiographs. A size 2 plate was used for both caudal mandibles (using a parallel technique). Also, the reduction in the number of exposures assisted in reducing overall anaesthesia time.

Intraoral radiographs revealed significant alveolar bone loss involving a number of teeth (105,106,107,108, 205, 206, 207, 208, 209, 305,306,307, 405, and 406) with a fractured distal root of right side maxillary 2nd premolar (106)(Figure 2). This root had most likely fractured due to the loss of periodontal support for this tooth. There was a periodontic-endodontic lesion involving left maxillary 4th premolar tooth (208), external root resorption of the distal root and a communication between the tooth roots and the mucosal sinus (Figures 3 and 4). 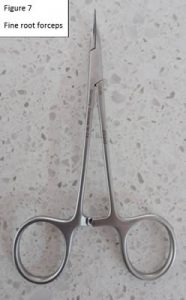 Due to the long running progression of the disease and the pet’s age, it was decided in consultation with the owner that a number of poor to hopeless prognosis teeth with grade 3 furcation would be extracted. Periodontal therapy would be performed on remaining teeth and the owner given instructions on the daily use of Hexarinse (Virbac Australia). Mucoperiosteal flaps were raised and multirooted teeth were sectioned with high speed LED handpiece (iM3 Inc., Sydney, Australia). The LED light source built into the handpiece is excellent for the visualisation of the furcation area, the alveolar bone and the underlying roots.

All extractions went smoothly except for tooth 206 with the fractured root. This tooth was sectioned into two roots but whilst trying to elevate the distal root, the distal root disappeared into the apical extent of the socket. A perioperative intraoral radiograph revealed that the root was in fact in the nasal cavity (Figure 5). The preoperative radiograph demonstrated the position of the root, so with the use of a size 4 tungsten carbide round bur (iM3 Inc., Sydney, Australia), the buccal bone plate overlying the distal root alveolus was removed, to better visualise the lost root. Removing this bone showed the entry point of the root into the nasal cavity (Figure 6), allowing for the retrieval of the root with fine curved root forceps (iM3 Inc., Sydney, Australia) (Figure 7). An intraoral radiograph confirmed complete removal of the root (Figures 8 and 9). Flushing of the alveolus with saline demonstrated saline exiting from the right nostril. This confirmed an oronasal communication and the mucoperiosteal flap had a releasing incision made at its base to allow for tension free air tight closure of the wound with absorbable 4/0 monosyn® (B. Braun, Australia). The owner was advised of the iatrogenic oronasal communication and informed that the dog may sneeze blood for up to 24 hours. He was also advised not to lift the upper lip to avoid unnecessary tension on the wound. At recheck, there was no nasal discharge and wound healing was continuing uneventfully. The owner had started Hexarinse daily and the dog was co-operative with this.

This case demonstrates the importance of preoperative radiographs to assist in the diagnosis and management of oral diseases, especially when planning tooth extractions. Sometime in the future, veterinary registration boards will require veterinarians to either offer intraoral radiographs to their clients or the need to refer patients with oral disease to a practice that can offer such a service (this has already happened in the state of Nevada, USA). In this case, intraoral radiographs were essential to manage the stage 4 periodontal disease, treat the mucosal sinus and to identify potential complications of tooth extraction and to assist in dealing with these complications.

In conclusion, it is well accepted that the use of intraoral radiography assists in the diagnosis and treatment planning for periodontal disease as well as other oral pathology.

Consultations:
Monday to Friday: from 8:30am